With many amusement parks in Japan to choose from, you won’t find any other like Huis Ten Bosch theme park (ハウステンボス). Huis Ten Bosch Nagasaki isn’t just a theme park, it’s a small Dutch city. Personally, I think it’s better than the one in the Netherlands because it was incredibly clean and well maintained. Huis Ten Bosch Japan (ハウステンボス) is a Dutch amusement park in Japan. They have windmills, large flower gardens with tulips, outdoor activities, restaurants, robots and a lot of entertainment. Huis Ten Bosch Palace is an actual place in the Netherlands and Nagasaki decided to recreate their own theme park inspired by Huis Ten Bosch Palace.

You can find Huis Ten Bosch on the west side of Japan, about 100 minutes from Nagasaki and about 2-hours from Fukuoka.

It’s a LONG way from the major cities in Japan, but if you happen to be in the area and don’t want to pay the high admission costs to enter Huis Ten Bosch theme park, you can visit the free zones.

I’ve been to Universal Studios Japan in Osaka and that experience was very crowded. A 12-hour trip there resulted in 3 rides due to the heavy crowds and lines. Popular amusement parks in Japan can be very crowded, but Huis Ten Bosch theme park was much different.

From what I observed, it seemed like there were more workers than employees! I was there on a Tuesday in October, but there were very few people. This is probably due to the high cost of entry and distance from any major city in Japan.

Huis Ten Bosch Nagasaki (ハウステンボス) is made up of 9 Different Areas For Guests To Enjoy:

Attraction Town: A Town Of Amusement and Gastronomy

Within attraction town, there’s a lot of entertainment and dining. If you’re feeling very hungry, for 3000 JPY you can go to the Robot Restaurant (labeled as “Unusual Restaurant” in the English Huis Ten Bosch Japan map) and eat at their buffet. They have 3 robots: 1 cook, 1 bartender and 1 ice cream server. The food is just okay, but the experience is what you’ll always remember!

Be sure to find the Cremia booth in Attraction Town. It’s at Muse Deli & Café. Cremia is a super-rich and creamy ice cream that will run you 500 JPY per serving. Regular ice cream can be found for 200-300 JPY around the park, but this is a premium experience that you must try. Cremia is my absolute favorite ice cream in the world.

In Flower Road, it’s best to experience during the daytime. Incredibly beautiful views of flowers and windmills. You can even rent a bicycle for the full Holland experience!

I walked around Thriller city, but avoided most of the attractions. Being frightened in another language will cause problems.

While in the Thriller City area, I attempted to use the public restroom. It was terrifying. I completely forgot that this whole part of the park is themed like a murder! Imagine someone was just murdered in a bathroom in an abandoned building years ago (but was still a very clean bathroom). After walking in, I walked out and proceeded to find a restroom in an area without blood.

First off, none of the café’s have any marijuana. You can buy cake and desserts, but none of them have marijuana. It was an expensive and fattening test, but I had to be sure!

I really enjoyed this part of town. It was right along the water and felt like being in a European waterfront. The experience was ALMOST as nice as being in Gdansk, Poland.

This feels like a very peaceful neighborhood in the Holland suburbs. Forest Villa is a compilation of hotels that look like Dutch Houses. There aren’t many attractions here, just a premium hotel. 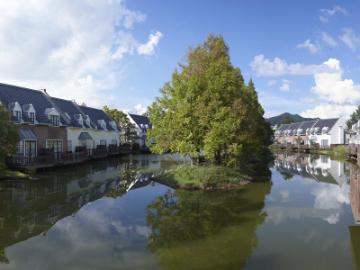 You can find Palace Huis Ten Bosch next to Forest Villa. It’s a palace!

Tower City: A Town Of Towers And Restaurants

Yup, towers and restaurants. Not much of a draw to go to this area unless you haven’t eaten yet.

The towers are beautifully lit at night so be sure to visit then. Don’t forget about the fireworks show at 9pm!

This is another themed garden area. They have one section that looks like it’s from Alice and Wonderland. This area looks beautiful at night!

The adventure area is mostly targeted to young kids. A few of the attractions are for everybody and some of them can be very challenging!

When you enter through the Welcome Gate, there’s a “Canal Cruiser” that will take you from the welcome gate to Tower City. The service is free during the day, but there’s a charge for night rides. That’s because there are light shows along the canal at night.

For VIP ticket holders, there’s no fee. I’m cheap and wouldn’t spend the extra money for a VIP ticket to this empty amusement park.

If you’re staying at one of the fancy Huis Ten Bosch Hotels (Hotel Europe, Hotel Amsterdam, Forest Villa), it will cost you 800 JPY.

For everyone else, it’s 1000 JPY to ride the gondolas at this theme park in Japan.

If you want the full Dutch experience, you’ll want to rent a bike and ride it around the flowers and windmills. Since this is a for-profit theme park, it will cost you some extra cash.

A standard 1-person bicycle will cost you 500 JPY for 1-hour and 1500 JPY for 3-hours. Not much of a deal for renting it longer and it’s weird that there’s only those 2 options.

A shuttle Bus Between the JR train station, the theme park and the theme park hotels runs every 15-minutes. The walk takes about 15-minutes so it’s up to you if you want to wait. Huis Ten Bosch has a large entrance bridge that the shuttle bus doesn’t drive-on. That’s about a 5-minute walk but very pleasant.

Getting To Huis Ten Bosch (ハウステンボス)

There are two types of trains running North and South on the JR Line.

From Huis Ten Bosch, the train that takes you south to Nagasaki is this black train that looks like it’s straight from Harry Potter. To get to Huis Ten Bosch station from Nagasaki station, it will take you approximately 100 minutes.

It will take you approximately 132 minutes on the fastest train to get from Hakata station to Huis Ten Bosch Station. The Shinkansen (bullet train) doesn’t run to the Sasebo area, so it’s slow local trains.

If you need train tickets from Hakata to Huis Ten Bosch, in addtion to park tickets, you can get a packaged deal from Klook.

If you have a JR Pass and are crazy enough to get to Huis Ten Bosch (ハウステンボス) from Tokyo, I applaud your efforts. From Tokyo Station, take the bullet train to Hakata Station. That will take about 5 hours and cost 23,000 JPY! But if you have a JR pass, you’ll be getting extreme value out of it.

From Hakata station, take the Huis Ten Bosch Line for another 132 minutes and that’s it. Only a 7.5 hour journey from Tokyo. You crazy son of a gun.

is the Dutch amusement park city of Huis Ten Bosch.  I initially went here to stay at a Robot Henna Hotel mentioned on Atlas Obscura and found out it was a Dutch City Amusement Park when I got there!

As soon as you get on the Huis Ten Bosch train, you’ll feel like you’ve entered a new world. The red bricks and chandeliers already are different from any Japanese train station.

Getting in to Huis Ten Bosch Nagasaki (ハウステンボス) is pretty expensive. You’re really paying for the experience and small attractions since they don’t have any rides included with the pass. There aren’t any roller coasters, but they have a ferris wheel and gondola rides. Those will incur an additional charge after your admission fee.

Pricing can be found on the Official Huis Ten Bosch website.

Huis Ten Bosch ticket prices are pretty expensive! The last train to get you back to the city is around 9:30pm so be careful if you’re planning a day trip. Otherwise hotels at the park can cost you over $150 USD!

You can get a small discount if you purchase your tickets through Klook. If you haven’t used Klook before, here’s my Klook referral link. You’ll get $5 USD credit towards any booking.

If you weren’t planning on getting a JR pass, there is a discounted package deal to get from Hakata Station (Fukuoka) to Huis Ten Bosch Station with the theme park tickets.

The most entertaining place in the park was the Huis Ten robot restaurant!  For 3000 JPY, you get to go to an “okay” buffet but have an extremely memorable experience. There was a robot bartender, a robot chef making okonomiyaki extremely slowly, and my homie Yaskawa-kun serving up ice cream. The bartender and ice cream robot was an additional charge.

It’s also important to mention that they sell Cremia Ice Cream! Definitely the best ice cream in the world! It’s also on the more expensive side for ice cream at 500 JPY per serving. But that super creamy ice cream is worth it. If you’ve never had it before and love ice cream, you won’t be disappointed!

If you still want to go to the Henn-Na Robot Hotel, you’ve been warned.

If you decide to stay at any of these 3 official Huis Ten Bosch hotels, you’ll get additional discounts within the Japanese theme park: Hotel Europe, Hotel Amsterdam and Forest Villa.

Live Music At The Beer Garden

Throughout the day, there are live music performances in the beer garden within Amsterdam City. They also had food stalls so you could have a beer and a snack with your musical experience.

After a long day of walking around, I found it really refreshing to have a beer and listen to music.

As for amusement parks in Japan, Huis Ten Bosch (ハウステンボス) is extremely out of the way for most travelers. The cost is high and they seem to keep adding additional charges within the park. They also don’t have any rollercoasters or the most amazing food. But what they do have is a super unique and memorable theme park in Japan.

Recreating a Dutch city really makes you feel like you’re no longer in Japan. The attention to detail and experience is better than taking a flight to Holland. My most memorable experience will be the Huis Ten Bosch Robot Restaurant because I haven’t seen anything else like it in the world.

Will you make it to Huis Ten Bosch? If you have already, what did you think?