China Airlines markets itself as a premium airline. Compared to the Low-Cost Carriers (LCCs), you’re supposed to get a lot more with China Airlines. In reality, the only difference is that you get a non-functioning TV monitor and a meal.

That’s part of the reason why I won’t fly China Airlines, but biggest reason is that China Airlines has an absurd refund policy. You should first know that this issue is something I had with China Airlines, a Taipei based airline. Not to be confused with Air China, China Eastern Airlines, China Southern Airlines, Grand China Air, China United Airlines or China Express Airlines.  As you can see, it’s not a very unique name.

Buying A Ticket With China Airlines

I purchased a roundtrip ticket with China Airlines from TPE to BKK for NT$7868 (US$260) directly on their website. During the entire checkout process, they don’t clearly state that you need to bring your credit card for verification at the airport. That’s actually on another page. If you’re purchasing a ticket for someone else, you’ll also need to fill out an Indemnity of Payment form and then bring the form, your credit card and ID to a China Airlines office. That’s absurd.

I’ve flown dozens of flights before, but this was the first time that they wouldn’t give me my ticket unless I had my credit card with me. If you happen to purchase a flight using your credit card for someone else, you have to physically go to a China Airlines office to show them your ID and credit card. Additionally, you’ll have to fill out an Indemnity of Payment form. These crazy rules apply to China Airlines and EVA Air.

This would be my 2nd trip flying with them. I’ve flown them before on their LAX-TPE route in economy and it was pretty good. Unfortunately their regional flights around Asia aren’t as good. 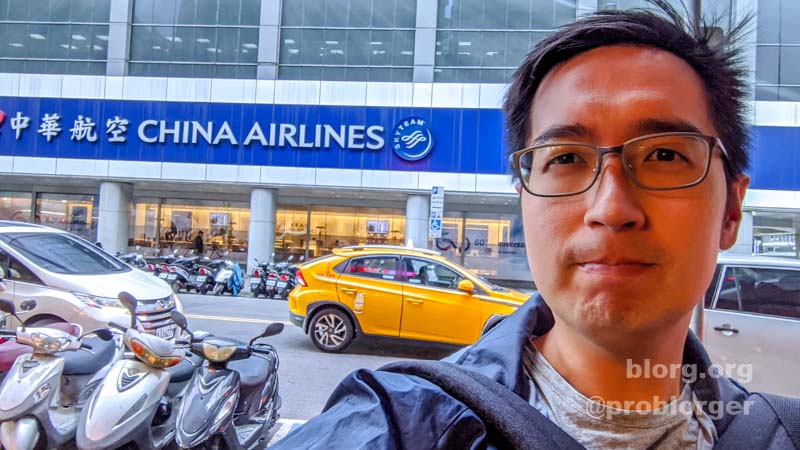 As usual, I got to the airport at least 2 hours before departure. Most airlines won’t let you check-in with less than 60-minutes to your departure time, China Airlines included.

I actually like hanging out at the airport since I have Priority Pass which gives me lounge access. That’s important because of the free food and drinks.

Upon checking in with China Airlines, I found out I needed to bring the credit card I booked the flight with. This was not clearly stated on the booking page and it was not in the flight email reminders from China Airlines. For me, this was a big deal because I did not bring that credit card.

What are my options?

I had the credit card set up with Google Pay so I could verify my card if they had a NFC sensor, they did not have that.

Alternatively, I can change my method of payment with another credit card I have. The check in agent redirected me to the China Airlines ticketing desk at TPE Airport…at least that’s what I thought.

They were only able to sell me another ticket for the same price! What? Lots of confusion going on in my head. That’s not changing the payment, it’s just extracting more money from me. The ticketing agent said that I’ll have to go to the Taipei office to get a refund or call their office. To get my refund, I would have to jump through some outrageous hoops.

Even though I bought my ticket online, they can only issue a refund in person at the corporate office. This is absolute nonsense for a refund, but challenge accepted.

At the end of my trip, I contacted China Airlines. I called the U.S. number since I was sure to get an English representative. After explaining the situation, they told me I could refund the ticket myself online at the official China Airlines website.

I tried for an hour. You can’t get a refund from China Airlines online. So then I called the U.S. China Airlines number again and explained the situation.

I called the Taipei office and got the official information. To get a refund from China Airlines, I would have to go to their Taipei office with my original credit card, passport and airline receipts.At this point my frustration is pretty high but I refuse to let China Airlines rob me.

It’s like if you needed a refund for something you purchased on Amazon, but didn’t receive, you would have to track down Jeff Bezos at the corporate office and show him your credit card. It doesn’t make sense. I purchased the ticket with a credit card in my name for myself. My name was all over this booking so there’s no chance of it being a fraudulent purchase.

But if it was a fraudulent purchase, it still doesn’t make sense. Let’s say someone stole your credit card and purchased a ticket with China Airlines, to get a refund you would need to go to the corporate office in Taipei with your credit card.

I honestly don’t see what type of consumer protection this provides. If a ticket goes unused because of this credit card issue, the ticket should be automatically refunded.

Refund Battle At The China Airlines Office in Taipei

The China Airlines Taipei office is located a short walk from Nanjing Fuxing Station. From my place in Tamsui, it took about 100 minutes to get there.

As I walked in, the China Airlines Taipei office looks like a bank. You’ll be required to get a number from the greeter before being able to see anyone. The place was empty. I took a number and waited. Since it was empty, I was up next but still had to wait a few minutes until someone actually noticed they had a customer.

It was only a few minutes, but I’m still bitter from having to actually go into the office. 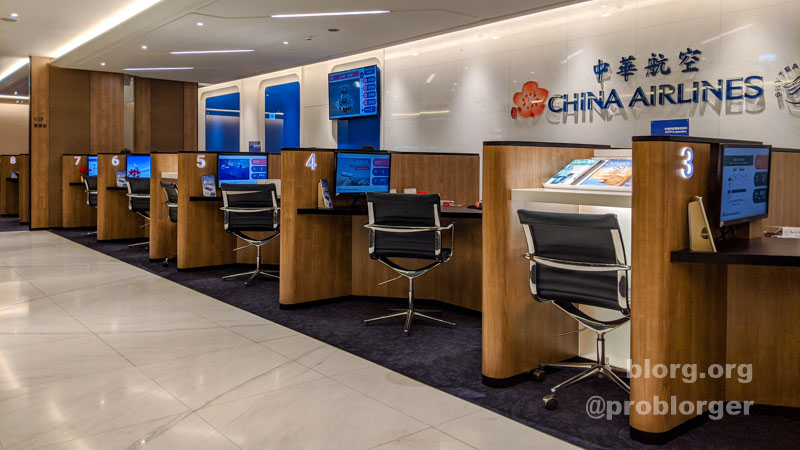 Processing The Refund with China Airlines

The China Airlines Taipei office is located a short walk from Nanjing Fuxing Station. From my place in Tamsui, it took about 100 minutes to get there.

As I walked in, the China Airlines Taipei office looks like a bank. You’ll be required to get a number from the greeter before being able to see anyone. The place was empty. I took a number and waited. Since it was empty, I was up next but still had to wait a few minutes until someone actually noticed they had a customer.

It was only a few minutes, but I’m still bitter from having to actually go into the office. 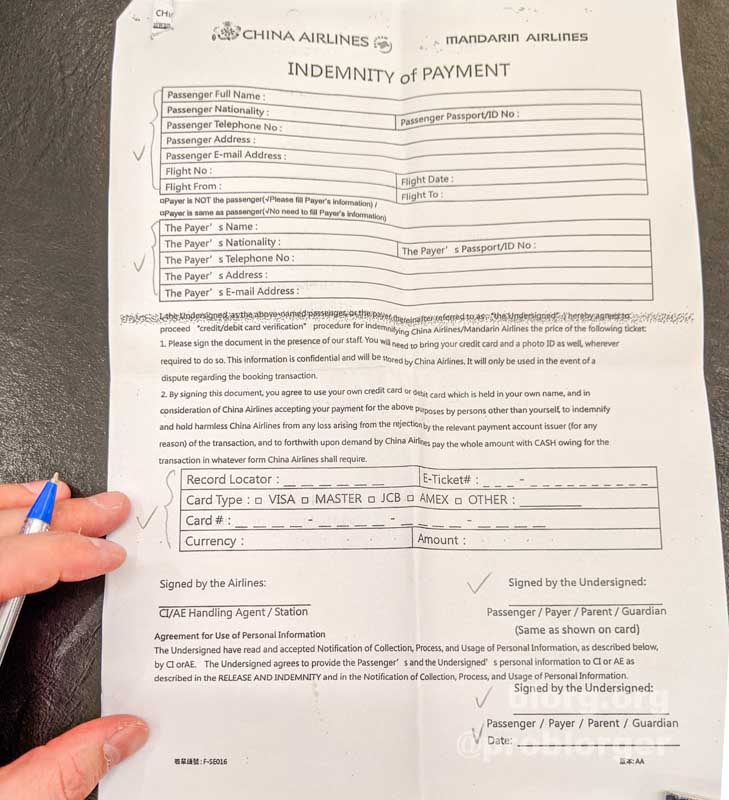 Stage 1 was getting the information and finding out that I couldn’t get a refund online. At Stage 2, I had to go through the paperwork process at a China Airlines office. Stage 3 is finally getting the confirmation. Instead of the estimated 10 days of processing, it turned out to be 14 days. I can understand that because there were a few holidays like Christmas and New Year’s.

I received the email and confirmed the refund amount. It doesn’t make any sense to have to confirm the amount since China Airlines has it on the paperwork and in the transaction history. 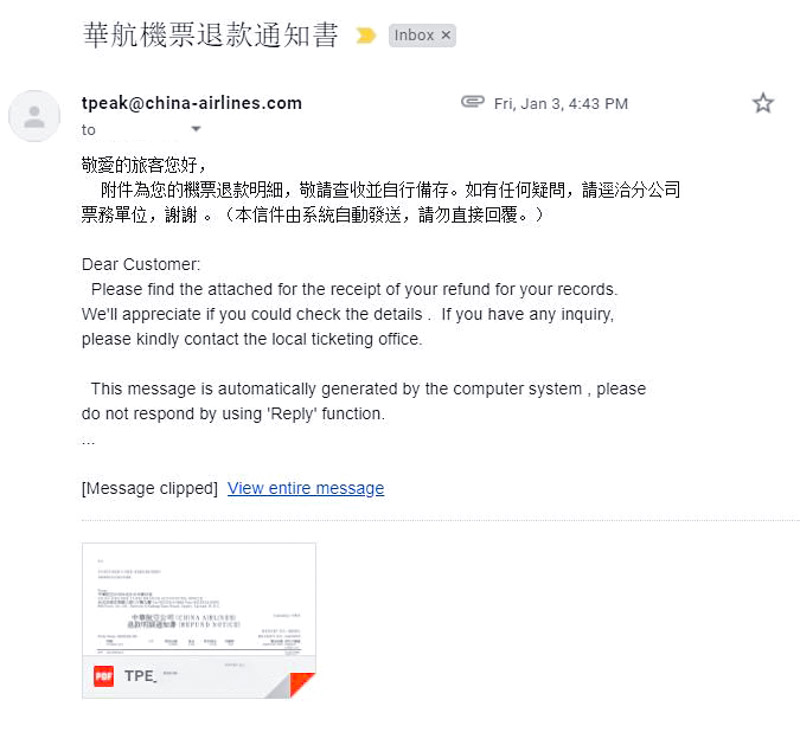 I sent a quick reply to confirm that the refund amount of NT$7868 was correct and that they can proceed with processing the refund. The estimated wait time is one month. This has been the worst refund process I’ve been through. Have you been through something worse? 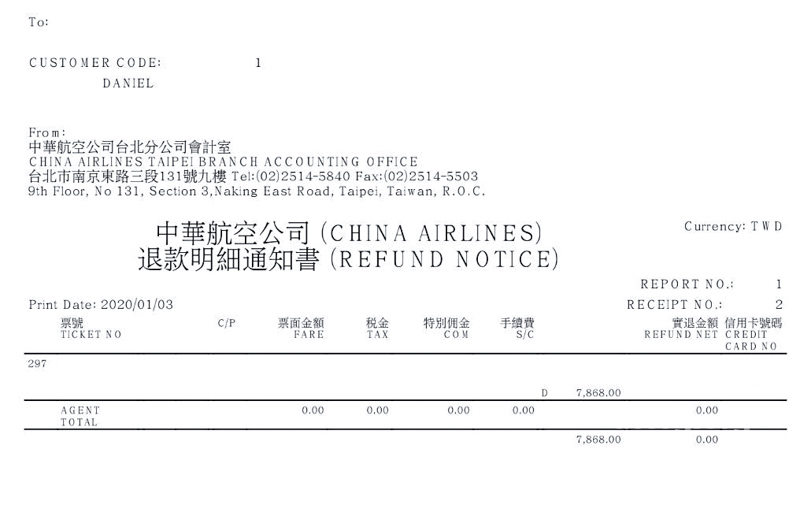 Will I ever fly China Airlines Again?

Nope. At least not with cash flights. I’ve flown them using frequent flyer miles before and I guess that’s a way to bypass the credit card rule. You could just use your credit card to buy frequent flyer miles with a SkyTeam partner and the book a flight with China Airlines. The refund process was outrageous and my flight experience with China Airlines was just as good as a low-cost carrier.

I probably won’t fly on EVA Air either by booking with cash flights since they have the same type of rules regarding their credit card payments.

I also made a video of the experience on YouTube. Check it out if you want a better visual experience of all the pain. There’s some very funny Bloodsport references in there to keep you entertained.

If you’ve enjoyed this post, you can help me out by Subscribing to the channel.