If you’re planning on taking public transportation in Okinawa, be prepared to not have your IC cards from Tokyo work.  Okinawa has its own system and limited lines.

My trip to Okinawa landed me in the International Terminal of Naha airport at 8pm (connecting from Taipei).  I went over to the information booth to ask how to get to my hotel (2-mile walk) from the airport by public transport.  She informed me that buses were no longer running at that time.  Dang.  The monorail would get me close enough to my hotel (Crowne Plaza Naha) but that leaves from the Domestic Terminal.

Getting From The International Terminal To The Domestic Terminal 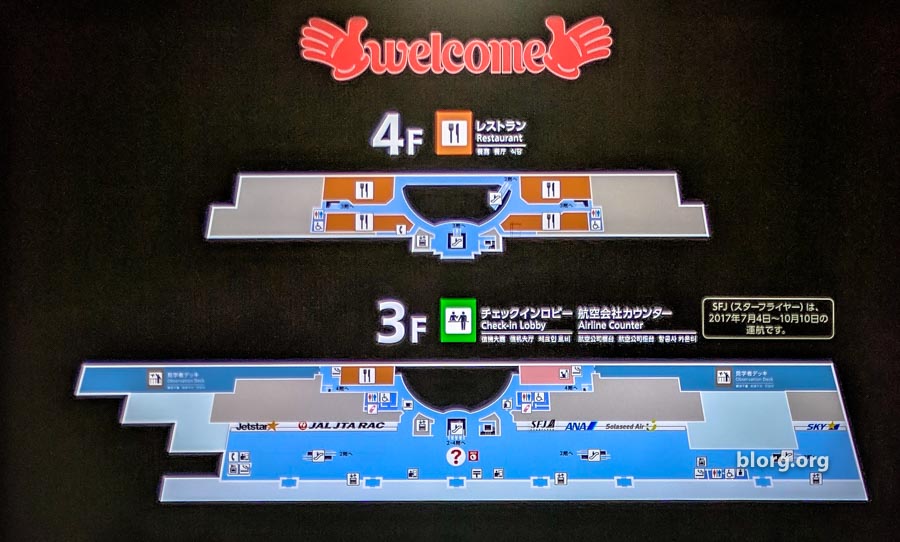 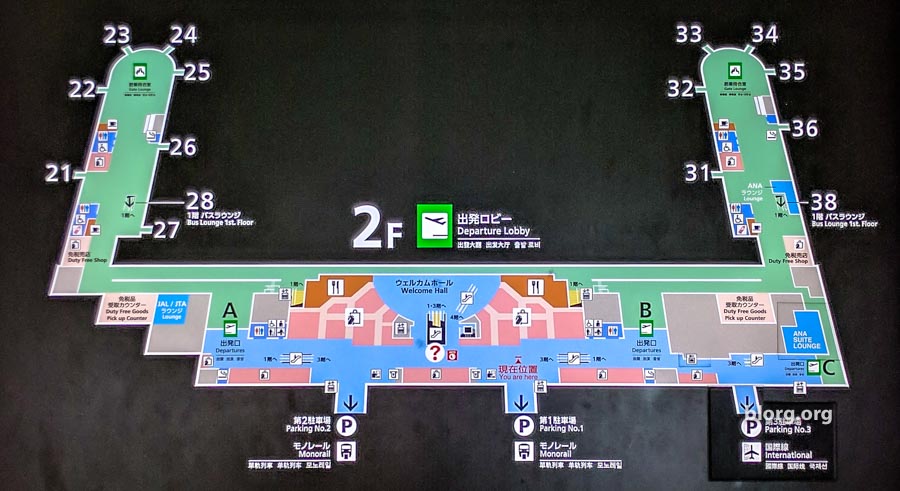 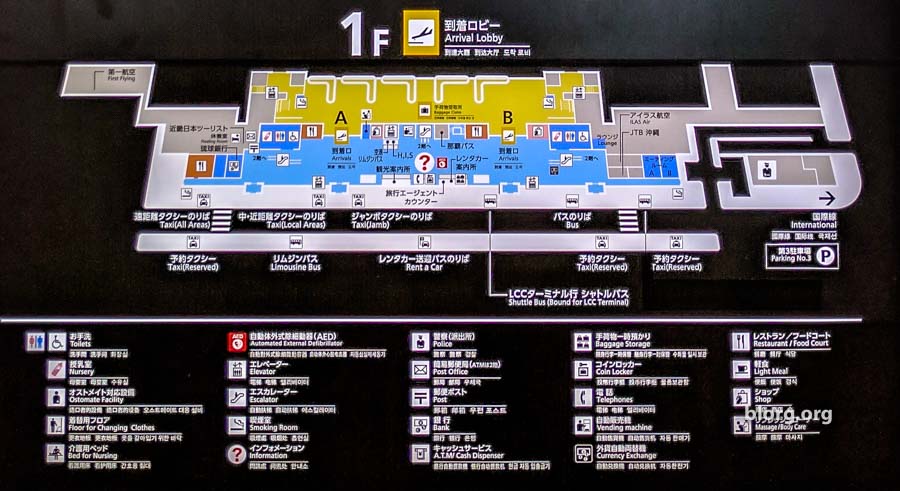 The walk from the International Terminal to the Domestic is far!  If you end up in this situation, run from the plane to the monorail station as fast as you can!  It gets very crowded to the point where you have to wait for the next monorail while one is there. 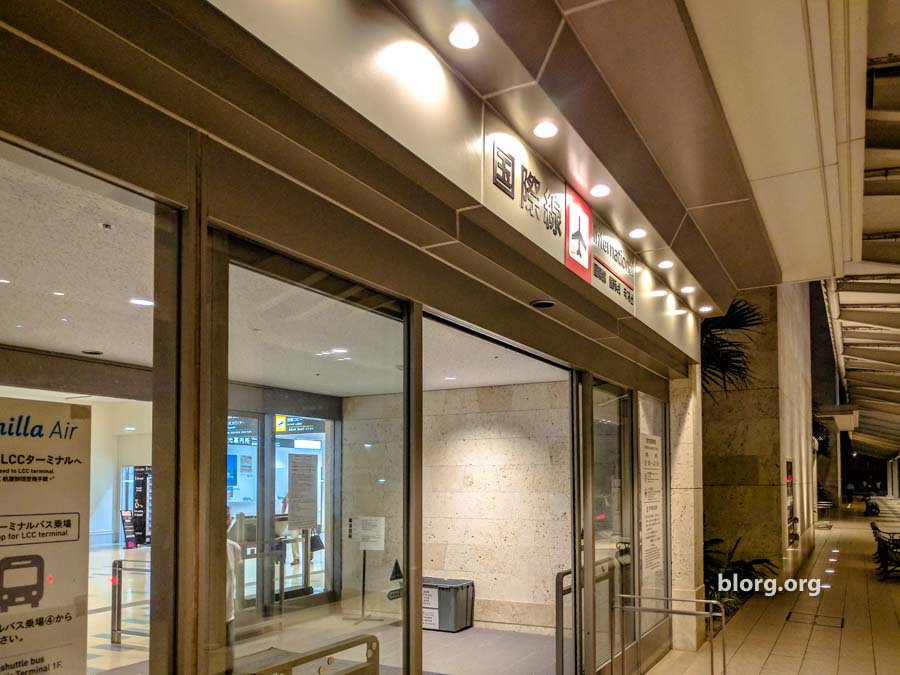 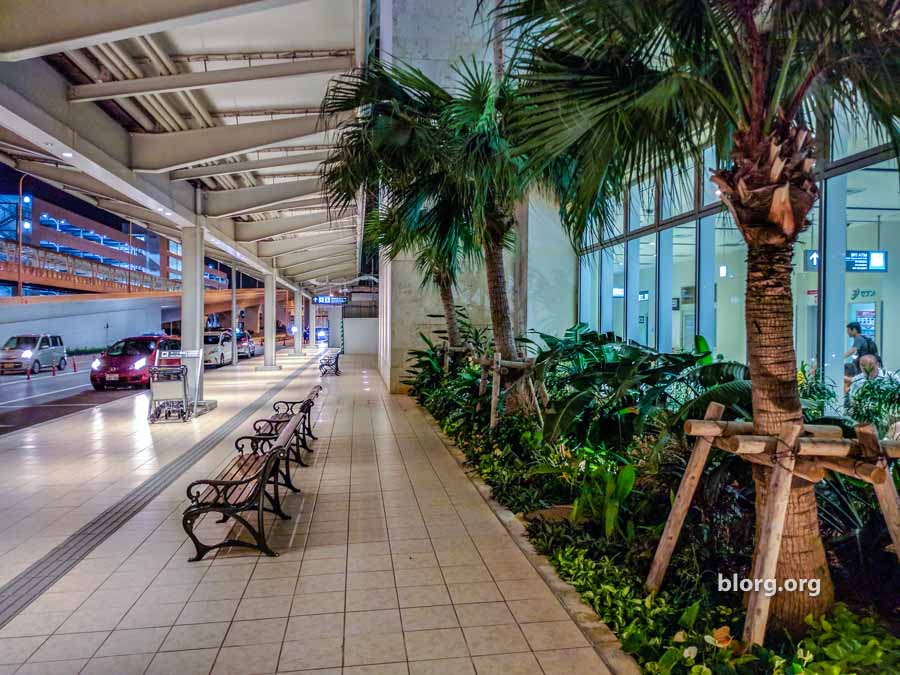 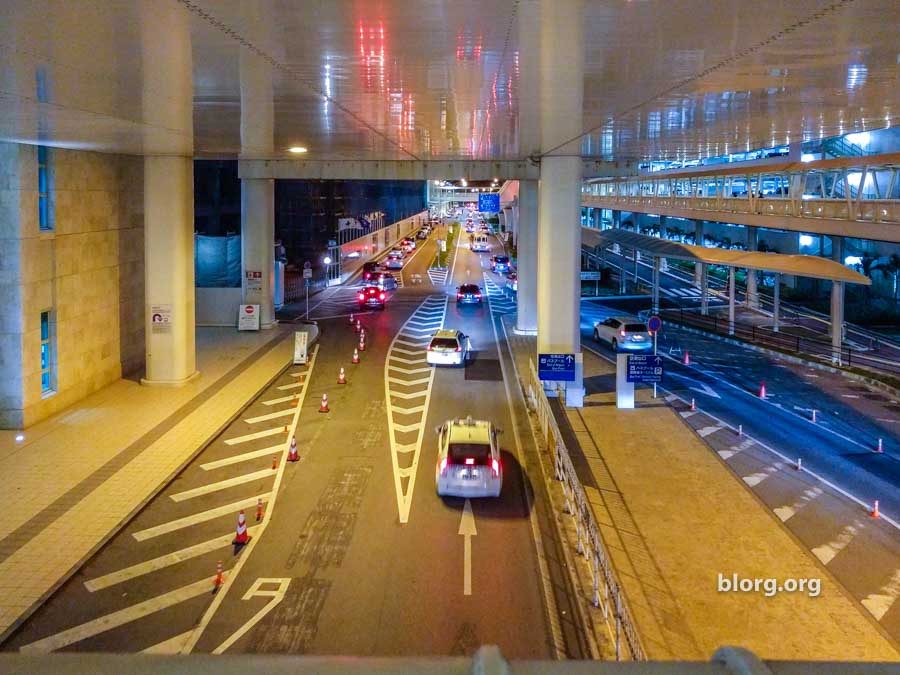 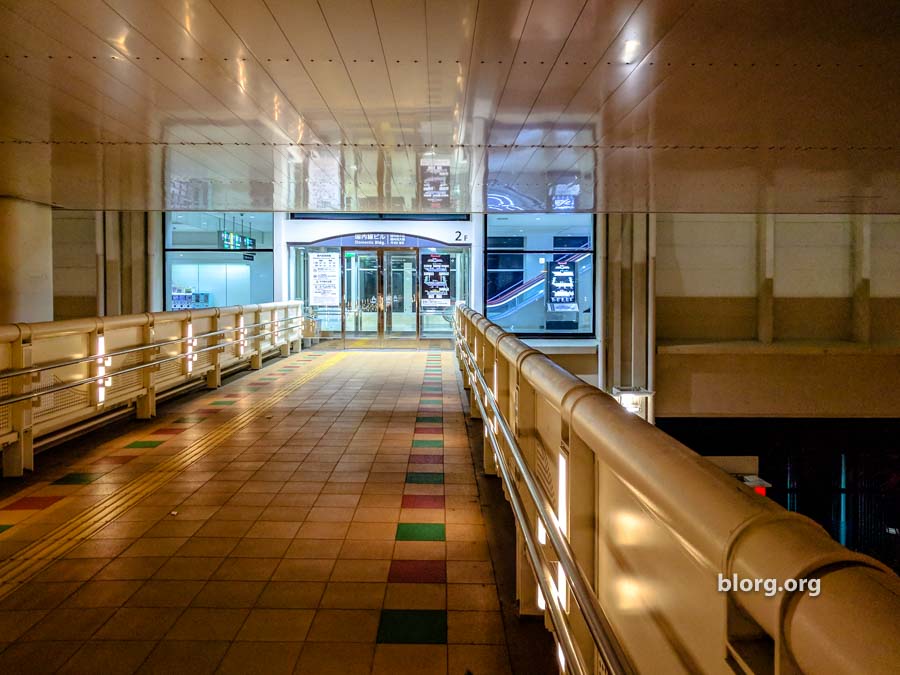 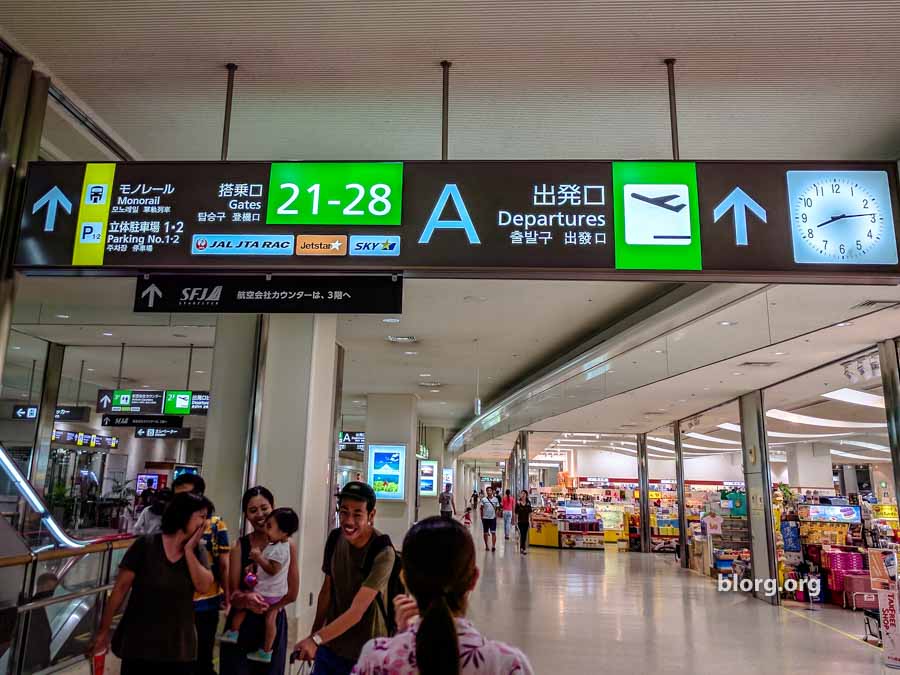 As soon as I got to the monorail station, I saw this incredibly long line.  I walk past it and notice that everyone is in line to buy a monorail ticket.  I look at the entrance and see an “IC” card logo on the terminal so I attempt to pass through with my Suica card.  No luck! Someone walking by mentioned that I can’t use that.  I reluctantly got in the super long line. 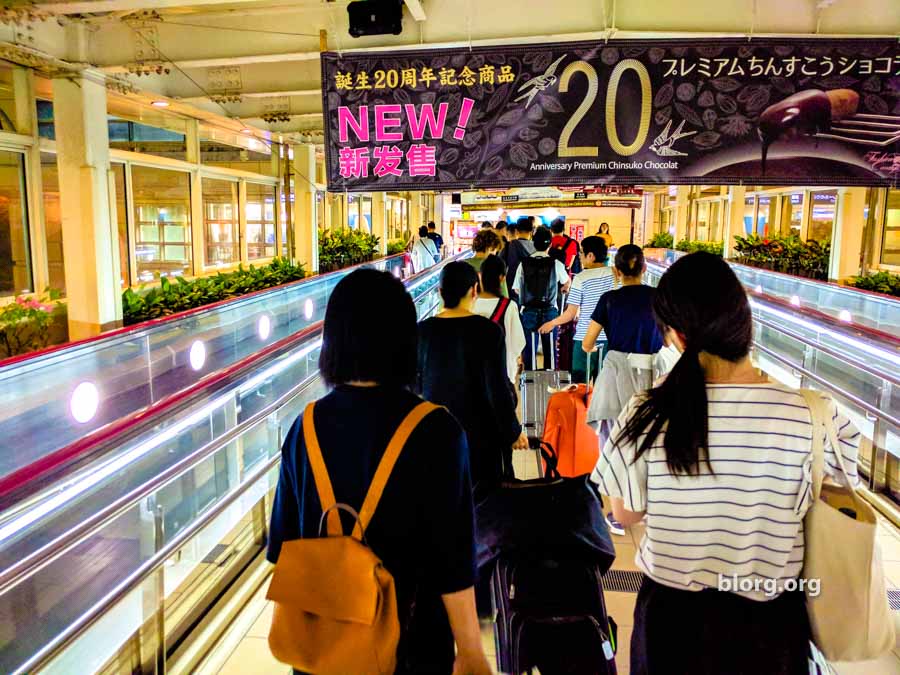 The line to purchase tickets was very long because flights are still landing into Naha around 8pm and buses stopped running.  Everyone is taking the monorail because taxis are very expensive in Japan.

I was headed to Tsubogawa station (260JPY) which was 4 stops from the airport.  At the platform was another long line of people.  The monorail was there, and a few people were attempting to force themselves on with luggage.  I passed on that. 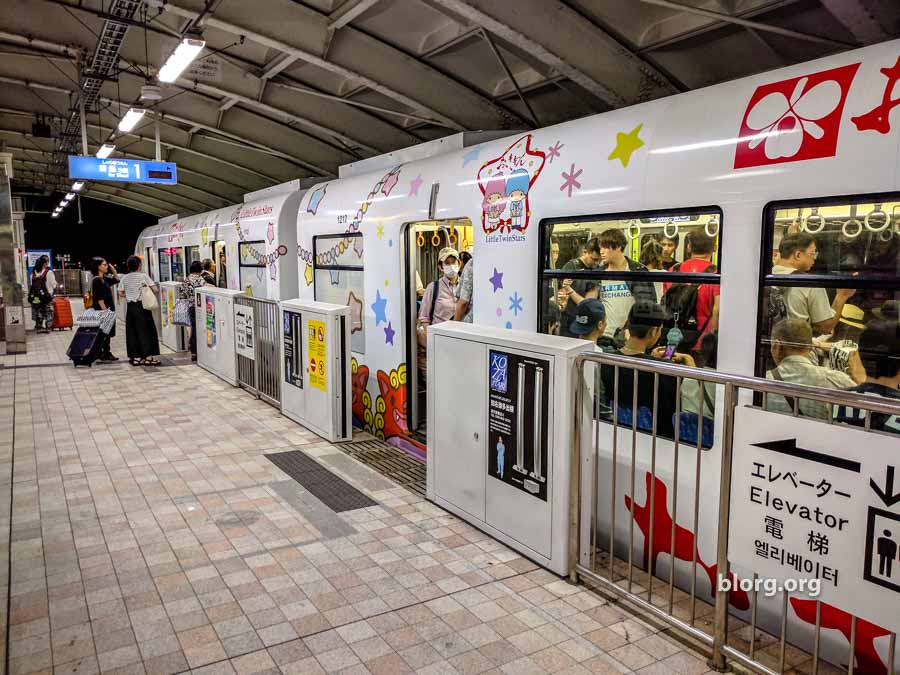 After waiting for 15 minutes, the next monorail was ready to go. I got on pretty early and positioned myself by the doors on the left side (people were entering on the right).  Since my stop was only 4 away, I didn’t want to get blocked in.  That train car was packed with people and luggage.

As we approached the 4th stop, I was really hoping the doors would open on the left.  I was only 1 person away from the door while on the right side I’d have to sneak by 10 people with luggage. The upcoming station broadcast played and said the doors were opening on the left!

From Tsubogawa station, it was a 15 minute walk to my hotel…in the rain.  Google Maps said 8 minutes, but it took me to the back of the hotel where there was no entrance.  I had to walk around a giant uphill block to get to the hotel.

All in all, it took about 80 minutes to go from the airport to my hotel (2 miles away).  If I were to do this again, I’d probably take a taxi or walk.  I later found out a taxi would have cost around 1200JPY and would have saved me from a lot of frustration.

1 thought on “Getting From OKA Airport (Naha) to Naha City”